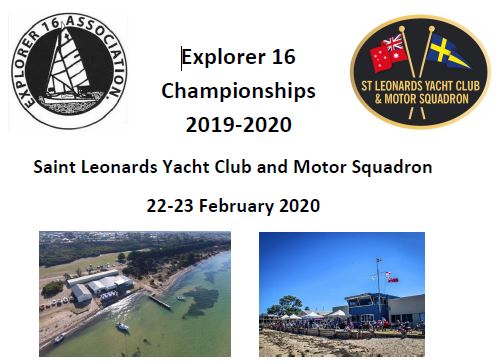 Café open from 10am and bar open from noon both days.
There will be a live local band from 4pm Saturday and a BBQ and dessert early on Saturday evening ($20, free for kids under 12).
Bookings essential (with your Race Entry, or separately if a spectator). 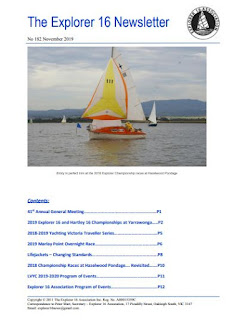 Explorer 16 Newsletter No. 182 has been published.

If you haven't been emailed a copy, then it's probably because we don't have your current email address.
If so, send it to explorer16news@gmail.com

And a reminder, membership renewals are now due! 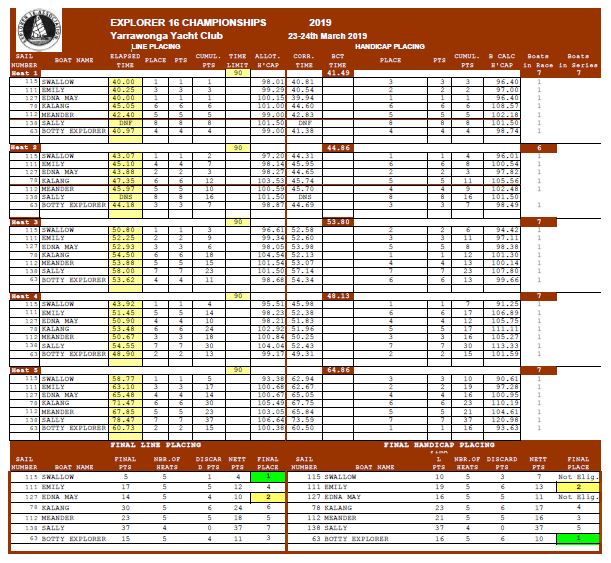 In accordance with the NOR, with seven boats competing, places are awarded for first and second in both Championship (Outright) and Handicap Divisions.

Congratulations to Sue Burke and crew Tracie Ham as Outright Winners in Swallow, and to runners-up Michael Lambiris and crew Jonathan Gwinner in Edna May.

Congratulations to John Parkes and crew Robin Quirk as Handicap Winners in The Botty Explorer, and to runners-up Frank Strickland and crew Alison Strickland in Emily.

Well done to all competitors and crew for engaging in spirited competition. A big thank you to Yarrawonga Yacht Club for hosting a marvellous weekend of racing and socialising, and to the Hartley TS 16 Association for sharing their regatta weekend.

We arrived Friday afternoon to find some other competitors had already pitched their tents and were rigging their boats. Boats continued to arrive as the day progressed. It was great to have the mix of Hartley’s and Explorers with great camaraderie. It was good to catch up with old and new friends.

Yarrawonga Yacht Club was faultless in being as welcoming and helpful as they possibly could be.
Some of us chose to camp and others to stay in other local accommodation. This didn’t impair the ability for us all to socialise.

There were seven Explorers and 12 Hartley’s. I have an Explorer my husband Trevor has a Hartley, we towed them both up separately.

The seven Explorers were Edna May, Emily, Kalang, Meander, Sally, Swallow and The Botty Explorer (from NSW). There were 12 Hartley’s. Explorers started 5 mins after the Hartley’s in the 5 races over the two days.

The first day saw hot weather, with a fresh north-easterly breeze that encouraged a few of us to reef, and few to use spinnakers! Two back-to-back races were held before lunch, and a third after lunch when the wind moderated.

Swallow decided to have full sails and not use the spinnaker in the morning. Emily was reefed and did well in the conditions able to keep the boat stable and got into the lead at times. Edna May had full sails and also did well having periods in front in the first two races. The result of the first race was a dead heat between Edna May and Swallow, equal first. Edna May was in front but Swallow was down the port end of the finish line which turned out to be favoured.

The second race also saw the lead change positions and only seconds between Swallow and Edna May at the finish. During the second race on the last downwind Swallow lost her whisker pole overboard , never to be seen again. Tracie had to hold the gib out manually for the rest of the downwind.

The third race after lunch on the Saturday saw those boats who had reefed shaking them out. More spinnakers were on display.  Swallow was very kindly lent a whisker pole from Sally which helped her keep in the top of the fleet. That was amazing generosity, thank you, Jonathan. The Botty Explorer put her Spinnaker up on the first down wind and was blitzing everyone, then they got into real trouble trying to bring it down which put them right down the fleet, narrowly avoiding taking out Meander.


Sunday saw lighter winds. YYC had their boats racing with us as the third start, what a great sight on the water. Swallow was fortunate with finding a few lifts others didn’t get and going for clean air, luckily getting two more first positions. The last race though was down to a knife edge and all explorers were fortunate to finish and get a place. The first Explorer made it within the time limit by just over a minute and the last one by 18 seconds.

The results were 1st Swallow, 2nd Edna May, 3rd The Botty Explorer

Thank you to Yarrawonga Yacht Club for hosting a great regatta, for amazing hospitality and a great BBQ on the Saturday night.

Thank you also to the Hartley TS16 Association for allowing us to share their regatta.